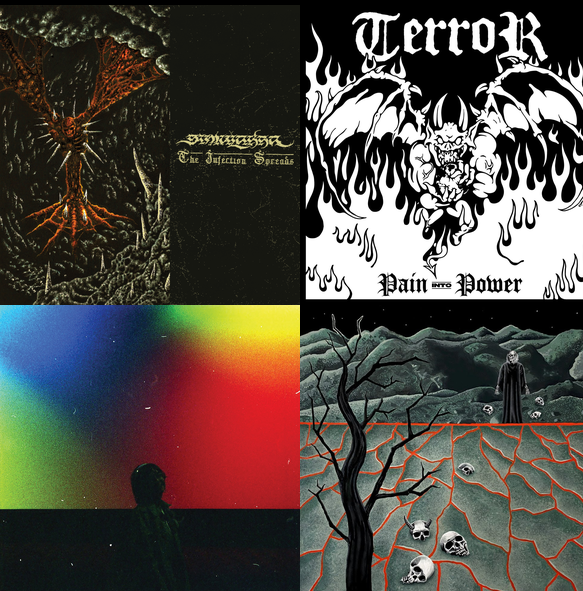 Hardcore is currently thriving and it doesn’t seem to be slowing down anytime soon. As a way to document this current moment, we present Step 2 Rhythm, a monthly column rounding up the best in hardcore coming out right now.

Cape Fade is primarily the project of Mindforce bassist Nick Haines, with singer Jay Petta contributing drums. While it’s the latest in a slew of projects from Mindforce this one is a bit different. Instead of excavating the typical NYHC territory Cape Fade looks towards the 90s when hardcore and alt-rock began to intersect. You get to hear this combination best on the iconic BURN EP from 1990 and would be perfected when singer Chaka Malik would go on to form Orange 9mm. In these two projects, the typical NYHC groove would be paired with vocals that resembled singing more so than the gnarled growl people had become accustomed to. Haines is clearly a student of this era, shifting between singing and his own version of a typical hardcore delivery. He’s able to delicately balance these two deliveries without it ever becoming corny and to be able to pull that off is no small feat.

Envision embodies a time when metallic hardcore was still young and not yet a codified outgrowth of hardcore. There was a sense of discovery several decades ago where bands haphazardly discovered something novel. All of these years later, the allure of metallic hardcore is still strong and excavated to pretty good results.  …And Still, the newest EP from Envision is the most recent example, taking influence from their home state of Florida and trying to add their own spin to metallic hardcore. The guitar in particular has flourishes that would sound more at home on a speed metal record, making sure to distinguish itself from the sea of music that’s released weekly. The end result is one of my favorite releases from hardcore this year.

Judy and The Jerks-Music to Go Nuts

Judy and The Jerks have a formula and have stuck to it since forming in 2017. Their songs are simple, revolving around spastic guitar chords and a sturdy rhythm section. This dynamic is juxtaposed against bubbly vocals that are more in line with The Go-Gos than the hardcore cannon. And compared to the glut of self-serious hardcore, listening to Judy and The Jerks feels refreshing, making me compelled to revisit Music to Go Nuts several times. “California” for example is pretty straightforward lyrically, with the narrator imagining moving from the south to California. Sometimes I just need music to be joyous and Judy and The Jerks definitely provide me with plenty of that.

Hardcore looks a lot different since Praise released Leave It All Behind in 2016. Drummer Daniel Fang has reached new levels of popularity with Turnstile, helping to raise the genre’s profile. More bands are using Revolution Summer as a template for their projects. But Praise has always been one of the best, using DC as a springboard instead of a xerox machine. It’s most clear when you listen to All In a Dream, the debut record for the band. Singer Andy Norton embodies those same themes that Guy Picciotto did nearly forty years ago, writing about his own experiences rather than the typical fodder for hardcore lyrics. Norton writes about life in the middle, situating his lyrics between light and dark. This philosophy is really embodied in the phrase “people aren’t one thing, we can grow” on “Limited Sense of Possibility”.

There are a lot of ways you can describe Simulakra’s brand of metalcore: ominous,  bone-crushing, and the soundtrack to the end of the world. While some of these descriptors may seem cliched they do impart some of the experience of listening to Fading Away, the debut LP for Simulakra. It feels like metalcore at its darkest and most maximalist, never really offering any reprieve in its 21-minute runtime. It’s only after it’s over that you can relax once again.

It was a sad day when C.H.E.W. broke up at the end of 2021. Their 2018 record Feeding Frenzy was one of my favorites of that year and showed that there was still room for exploration in hardcore punk. Thankfully the majority of the band has reunited as Stress Positions with a new vocalist. The transition to this new project has proved seamless with their debut EP Walaang Hiya. In many ways, it feels like a followup to In Due Time, which was the last release for C.H.E.W. All of the hallmarks you would expect from these musicians are on full display. “Interloper” and “Failed State” are blistering fast slabs of hardcore punk and never really slow down from the first note you hear. But occasionally there are detours, choosing to languish in a slow-moving dirge (“Unholy Intent”) to give listeners a little bit of a break.

Sunami borders on satire, turning the world of beatdown into borderline camp. Singer Jose Alfonso is confrontational, constantly berating the listener with angry posturing. It’s a perfect match to the batch of metallic hardcore that Sunami has been brewing, boasting song titles like “Weak Die Slow” and “Mind Your Business”. This alchemy has been a large part of why Sunami has risen so quickly in the hardcore community in the past few years off of a few EPs and a split with Gulch. And it seems like they won’t be slowing down any time soon with a three-song promo to tease an eventual record.

Hardcore would not be the same without Terror. They are the blueprint of longevity, creating multiple records that are still relevant now. But that early era of the band is what I look back at most fondly, ending with One With The Underdogs. After its release, Todd Jones would leave the band, making his own impact in the 2010s with Nails. Now over a decade later Jones has returned, producing Pain Into Power and as a result, has helped create Terror’s best record in a while. Not only is it the band at its fastest but it’s paired with a heavy production that makes for a powerful combination. That a band after two decades can make a record this strong is truly a marvel.

Though Warthog has been around for over a decade they’ve still never released an LP. It seems like an almost purposeful move for the hardcore punk outfit, working from an understanding that hardcore works best in short formats. There has still been incremental growth throughout all of their releases if you listen to their discography chronologically. Their demo is full of quick bursts and the songs are super concise. Now a decade late on their newest EP there is a significant difference. The songs are a bit longer, sometimes choosing to repeat certain parts or phrases to create some legible structure. It’s these slight changes that still make Warthog a compelling band to follow all these years later.

Reissues are just as important as anything that comes out of the hardcore scene on a monthly basis. It’s the way bands become remembered and reach a younger audience. Without it, they could be relegated to the dustbin and forgotten. There is a whole swath of bands that are only available because of Youtube, which really limits their reach. This lack of access matters because for some, if it’s not on Spotify it might as well not exist. To alleviate that reality I’ll try to give a shoutout to one reissue or a new album I discovered each month.

Drowiningman-Busy Signal At The Suicide Hotline

1998 saw an explosion for hardcore in many directions. Cave In would create a foundational text for metalcore with Until Your Heart Stops; Botch would help give birth to mathcore with American Nervoso; Refused would make its grand statement with The Shape of Punk to Come. While Drowningman never reached the same popularity as their peers they would make their own mark with Busy Signal At The Suicide Hotline. On it, they display a dizzying cacophony of chaotic hardcore that sat right at home with the burgeoning Boston scene at the time. Now two decades later the band has reunited, releasing their first material in 18 years. It makes Drowningman ripe for a reissue and they not only do that but remaster the record, giving the songs a new life. The vocals in particular are a bit more audible, giving the music the treatment it deserves.

The Alternative is ad-free and 100% supported by our readers. If you’d like to help us produce more content and promote more great new music, please consider donating to our Patreon page, which also allows you to receive sweet perks like free albums and The Alternative merch.

Best Courses For You

How To Bring Your Text To Life In After Effects

In this course, you won’t just learn how to create text an...

Remote work has been dubbed ‘the way of the future’ and ...

Taboola’s mission is to help you reach a more relevant aud...

If you already understand the fundamentals of Photoshop and ...

This course will equip you to start and run your own photogr...

Neglecting to create a sound strategy before creating your d...

Learn the key principles of Adobe InDesign with this fundame...

How To Bring Your Text To Life In After Effects

In this course, you won’t just learn how to create text...

Currently, WordPress powers 35% of the internet and has over...